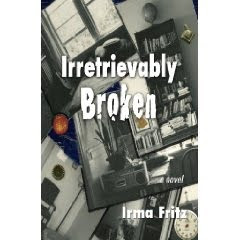 IRRETRIEVABLY BROKEN is the haunting, funny, and heart-breaking account of German ex-patriots Nora, Ruth, and Bettina Adler. The plot takes us across the U.S., to the bush country of Canada, and to a cold case murder scene in Germany as this multi-cultural family deals with diversity and racism. The novel is populated with unforgettable characters in a sometimes shocking and always unflinchingly honest exploration of the past. “Irretrievably Broken” was chosen as one of the top 20 novels by the online magazine, “Cold Coffee.”


AUTHOR IRMA FRITZ was born in Ukraine of German ancestry. By the time she immigrated to the U.S., she had already lived in five countries: Ukraine, Romania, Hungary, Austria, and Germany. Ms. Fritz developed a passion for writing at an early age. As a child, growing up in post-WWII Germany, she wrote poetry and short stories, and immersed herself in reading the classics. Upon moving to the U. S., she earned a B.A. in English from Cal State L.A. After graduation, she spent some years working as press agent at various Hollywood PR companies. After moving to Washington State, she worked in banking administration and human resources.

Ms. Fritz continued to hone her writing skills at the University of Washington as well as other writers’ workshops. “Irretrievably Broken” is her debut novel. The work was ultimately inspired by a newspaper clipping from her hometown in Germany. A neighboring property had been torn down and a mikvah, a Jewish ritual bath, was unearthed. Experts speculated that a synagog

ue would most likely be situated beneath the foundations of the house she had lived in as a child.

Ms. Fritz says, “I read the clipping and promptly forgot about it. Or so I thought! But this discovery must have been burned into my subconscious. After I finished the novel, I rediscovered the clipping and realized how these facts had informed my writing. There, at the heart of a story of adventure and travel, of love and loss, was a Holocaust story, come to light after years of concealment, very much like the mikvah that had been unearthed so many years later under our former neighbor's house in a small German town where no one in post-WWII Germany ever spoke about such things.”

“You must read this novel to truly understand the impact of what this amazing author has successfully written . . . This is a book that reminds us that forgiveness does not come easily and without a price. It is truly about a family that finds understanding and each other as result of their shared lives and experiences . . . I give this book FIVE GOLDEN STARS”
Fran Lewis: Reviewer
*******************************************

ONE THING I WANT READERS TO KNOW ABOUT MY BOOK:
Such incredible pain and joy to write! The characters “talked” to me for a long time after I finished the novel.

NEXT PROJECT and WHEN:
A book of short stories--with death as its common theme--I hope to publish before yearend. Next I plan to develop one of the short stories, “The Cat,” into a novel.