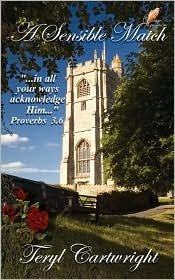 A SENSIBLE MATCH: How do you thwart well-meaning, but relentless, matchmaking parents without getting caught?

Abby's perfect solution was to try too hard to chase down and please her equally reluctant counterpart, the new vicar of Midland. Lord Edwin Chappell was certainly startled by her performance but too smart to be taken in by Abby's act. Just as she was showing him that she was anything but the perfect vicar's wife, he was trying to prove that her idea of a vicar was quite as far fetched.

After a humorous battle of wits and wills between the young couple, tragic events lead the matchmaking parents to stand against the match just when Abby and Edwin are falling in love. Now, the couple must decide to obey the time-honored dictates of their respective families or follow the path they believe God has now chosen for them.

Kay James of The Romance Readers at Heart website has this to say..."A SENSIBLE MATCH by Teryl Cartwright is one of those delightful books that brings a smile to the reader’s face from the very first page. Then, it kept me entertained so thoroughly that I was saddened to realize the adventure was nearing an end. Although the story feels a bit “rambling” in spots, the story is overall wonderfully written, engaging and through-and-through humorous. Not merely an account of one couple’s awkward courtship, it is a commentary on relationships. Those between men and women, families and their opinions on marriage and the opposite sex.

"A SENSIBLE MATCH is a sensible choice for summertime reading. It is entertaining and lively, romantic and funny. I loved watching the relationship between Abby and Edwin evolve. Without giving too much away, I’ll just say it was great fun to watch them change so drastically. They are not the same characters at the end of this novel that they were in the opening pages, and it was entertaining to watch the transformation."

An excerpt - A Sensible Match:
“Well?” Constance tapped her toe impatiently, awaiting Abby’s response.
“I am sure I must see him soon enough. I need not appear eager for I am not.” Abby’s heart raced; she wished she could just go home.
What must everyone be thinking? Were they watching her, too?
Constance moved to put her arm around Abby’s shoulder. “Truly I sympathize with you, sister, though I don’t understand.”
“You would not wish to marry against your will,” Abby explained. She really didn’t want to meet this man and resented her parents for insisting upon it.
“But if you don’t marry, I may have to wait!” Constance whined. “It doesn’t seem fair to do that to me. Now, does it?”
“Fair…what is fair?” Abby kept her voice low. “Should I marry to please you, Mama, Papa, his family, him…all but myself?” She ended up sputtering rebelliously.

“Isn’t it a Christian duty to forget the self? Besides, from what I can see of him, he looks a man of fine mettle.” Constance smiled provocatively. She kept stealing glances across the room to see the newcomers more clearly.
“Fine mettle.” Abby looked over her shoulder. She saw the top of his head with some difficulty for many people had moved to greet him.

“Look how he enters a room and makes it his own. Oh, how I hate how everyone crowds around him. How well pleased he must be with all the attention.”
She watched him move and talk. His smile was charming and his looks handsome… not at all what she had expected. Surprisingly, he did not look sickly; he looked very fit and well dressed for a country assembly.

He looked fine, but Abby told herself that Christian character remained more important above all. She would not be fooled by looks; she knew what he thought of her.
“His is the gift of a silver tongue and a smile that speaks as well,” Constance observed. She almost looked envious of her staid older sister and continued lightly tapping her fan against her arm as if preoccupied.

“Mettle indeed…fine metal. I’d rather he have a heart of gold than quicksilver wit or…or iron will.” Abby was not impressed by him or his winning ways.
“Perhaps he has lead feet as well. That would indeed be tragic if you must dance with him,” Constance teased. “Fine metal, Abby, just for you.”
Abby became envious of the ease with which he graced the dance. This man looked as if he had the gift of social graces. He seemed so eloquent that surely he could have his choice of bride. So why was he not already engaged? What was wrong with him?
Thoughts from the author:
* What or who most influenced your writing?
While Jane Austen’s Mansfield Park influenced my novel, A Sensible Match, my writing has most been influenced overall by Georgette Heyer and Louis L’amour.
* What is the one thing you want readers to know about your book(s) and/or writing?
I would like readers to know that it’s possible to have faith and a sense of humor; I try to include both within a great story.
* What is your next project and when can we expect to read it?
Courting Constance, sequel to A Sensible Match, will be published next year. It’s about “how to win a guy in 10 days” with hilarious results.
Brought to you in part by:
BUY: WOOF: Women Only Over Fifty , BUY: Wendel Wordsworth, BUY: Cynthia's Attic