In the new free South Africa of 1994, men are still boss, women carry handguns for self-protection, and some mistakes can change your life forever.
When a body is found during their weekend away with friends, Christine Chamberlain must use her brilliant mathematical mind to prove her husband's innocence...
... whether he's innocent or not.

When it comes to your loved ones, is it possible to know too much?
BH: What or who most influenced your writing?

Yvonne: Agatha Christie. She made her books work because of the clever puzzles, and I admire her for that. I don't subscibe to the current trend for violence and gore in murder mysteries.

BH: What is the one thing you want readers to know about your book(s) and/or writing?
Yvonne: My "Murder @ ..." series will transport you to a South Africa that's truly gone with the wind, to a time where men were men and women were decorations... or were they?

BH: Just who is Yvonne Eve Walus?
Yvonne: You won't believe this, but when I'm not a novelist I'm actually a Doctor of Mathematics. A wife and a mother. Most of all though - I am a writer (in several languages) and I will sell my soul for money.
Professional stuff: I'm a full member of Crime Writers' Association (CWA). I also belong to Romance Writers of New Zealand (RWNZ). 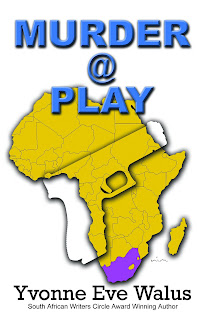 Posted by Mary Cunningham at 12:00 AM