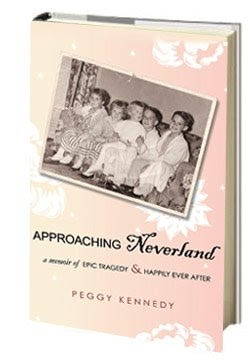 "Peggy Kennedy’s brave, beautiful and often humorous account of a family’s efforts to put the pieces back together, again and again, while continuing to endure more tragedy than anyone should ever have to, is a remarkable legacy to the people in her life and their capacity for love. Because, in spite of it all, time after time, even when love was not enough to change the circumstances, it triumphed." -- Diana Black

Approaching Neverland was named a Finalist in the 2009 Next Generation Indie Book Awards and won 1st prize for non-fiction from the 2008 San Francisco Writer's Conference.

Author Peggy Kennedy as been producing events in the San Francisco Bay Area for over 20 years, ranging from the Chinese New Year Parade to the Bay Bridge Celebration. She lives with her family in Northern California.

Read more of the book review as well as an interview with the author on the WOOF blog!

WOOF for more stories about special women in our lives...