Cat Connor with her "Killerbyte" in Bookland Heights 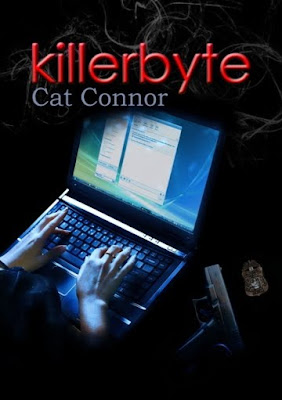 With a new and exciting voice, Cat Connor introduces Ellie Conway, an FBI Agent who challenges the rules with her attitude, sense of the ridiculous and how she tackles a serial murderer with a difference: a murderer connected with Ellie’s internet poetry chat room.

With a litter of bodies ‘presented’ in unexpected places, Killerbyte is a provocatively bizarre and entertaining dance. Ellie, with the aid of Mac Connelly, must track down a seemingly motiveless and ghost-like murderer, who defies detection. After her own mother is dispatched by this slaughterer, Ellie fears for the lives of everyone close: her lover Mac, her father, her boss Special Agent Caine Grafton, and chat room colleagues. Reluctantly she begins to suspect her boss, colleagues and, her brother Aidan.

A chance remark provides a connection between past hurts and present pain. 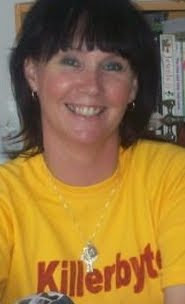 Cat, what or who most influenced your writing?
The desire to tell a story that I (and my friends) wanted to read- with a strong female mc and great supporting characters.

What is the one thing you want readers to know about your book(s) and/or writing?
Don’t start Killerbyte late at night – you won’t be able to sleep until you know who did it!