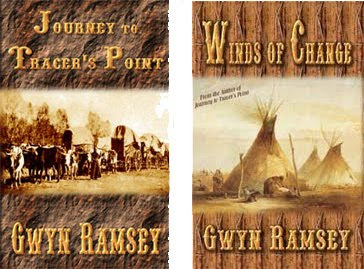 JOURNEY TO TRACER'S POINT:
They left Virginia with dreams of getting rich quick. When lured by his brother, John, to seek adventure in the California gold fields, Alexander Anderson sells his farm, packs up his family, and heads west cross-country in a covered wagon along
the unmarked trails.
Heavy hearted and compelled to make the perilous journey West, Caroline Anderson does not want to leave her comfortable home in Virginia and dreads the possibility of unknown hazards facing her and her family on such a long, dangerous trip.
When Caroline is abandoned, afraid of what lies ahead, she is forced to make a life-threatening decision. Determined to survive she trudges forward through uncharted land to conquer rugged mountain terrain, treks through treacherous Indian lands and crosses a searing desert. Her dim but only hope now is to find her brother-in-law and try to obtain her husband’s share of
the gold claim.

WINDS OF CHANGE:
After struggling through the throes of being kidnapped by Indians and traded for goods to the Arapahos, Sarah Anderson proves herself worthy of the Indian name Vision Seeker, becomes the wife to Running Swift and the mother to Little Feather.
Sarah settles into the comfortable daily routines of Indian wife and mother until her life is again changed when the Army charges into the village to arrest the warring warriors only to find Sarah living among the natives.
Returned to Fort Laramie, Sarah must now face the difficult task of transitioning back into the white world with an Indian child. As a soiled dove she is shunned by the white populace. At the fort, her path crosses that of Patrick O Brien whom she once loved and believes can no longer have.
********************** 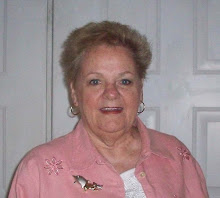 Gwyn Ramsey is the author of two published novels in a historical family series, Journey to Tracer’s Point and the latest Winds of Change.

GR: As a young person, I enjoyed the spaghetti westerns at the show. What an adventure each weekend brought to my life. I sat with a small bag of popcorn and watched the western stars ride across the screen. John Wayne captured my attention with many of his film. Then I began reading Louis L’Amour, Dana Ross Fuller, Zane Grey, and other western writers. Now I enjoy the challenge of bringing back the old west in my writings. A journey of where we came from.

BH: What is the one thing you want readers to know about your book(s) and/or writing?

GR:As a researcher at the Library of Congress, my books are fiction based on fact. I wrote my novels as fiction to entertain, but wanted to bring out the history of our wonderful country and what it truly was like back when people struggled to settle our land, being it pioneer, slaves, or Indians. The challenges they faced, the struggles they endured, and the disasters that befell them are what we must remember, it's who we are.

BH: What is your next project and when can we expect to read it?

GR: My latest book, Winds of Change, was released in April 2009, the second in the series about the Anderson family. The storyline is about Sarah Anderson, her life as a wife to an Arapaho Indian and the mother to his child.

My next project, Bound for Texas, is a work in progress and should be out in 2010. The story is the life and challenges of James Anderson who, as a young boy, is rescued from a river bank, hauled to Texas by two drifters and becomes a rancher, all the while searching for his family who journeyed west to California in Journey to Tracer's Point.
***************************
Brought to you in part by:
BUY: WOOF: Women Only Over Fifty , BUY: Wendel Wordsworth, BUY: Cynthia's Attic